What’s Inspiration, Infallibility, and Inerrancy!?    And Why Should I Care?

It’s been said that a table must have at least three legs to stand. Take away any of the three legs, and it will surely topple. In much the same way, the Christian faith stands on three legs. These three legs are the inspiration, infallibility, and inerrancy of Scripture. Take away one, and like the table, the divine authority of the Christian faith will surely topple. These three “in’s” complement each other, yet each expresses a slightly different distinction in our understanding of Scripture.

1. Inspiration. The first “in” is inspiration, and this deals with the origin of the Bible. Evangelicals believe that “God breathed out” the words of the Bible using human writers as the vehicle. Paul writes,

“All Scripture is given by inspiration of God (literally “is God-breathed”), and is profitable for doctrine, for reproof, for correction, for instruction in righteousness, that the man of God may be complete, thoroughly equipped for every good work.” (2 Tim. 3:16-17)

2. Infallibility. The next “in,” infallibility, speaks to the authority and enduring nature of the Bible. To be infallible means that something is incapable of failing and therefore is permanently binding and cannot be broken. Peter said, “the word of the Lord endures forever” (1 Pet. 1:23-25) and therefore its authority cannot be broken.  When addressing a difficult passage, Jesus said, “the Scripture cannot be broken” (John 10:34-35). In fact, He said, “one jot or one tittle will by no means pass away from the law till all is fulfilled” (Mat. 5:18). These speak to the Bible’s infallibility.

3. Inerrancy. The last “in,” inerrancy, simply means that the Bible is without error. It’s a belief in the “total truthfulness and reliability of God’s words” (Grudem, Systematic Theology, Inter-Varsity, 2004, 90). Jesus said, “Your word is truth” (John 17:17). This inerrancy isn’t just in passages that speak about salvation, but also applies to all historical and scientific statements as well. It is not only accurate in matters related to faith and practice, but it is accurate and without error regarding any statement, period (John 3:12).

But Is It Really Important?

Yes, inerrancy is extremely important because: (1) it is attached to the character of God; (2) it is taught in the Scriptures; (3) it is the historic position of the Christian Church, and (4) it is foundational to other essential doctrines.

1. It’s Based on the Character of God

2. It was Taught by Christ and the Apostles

Inerrancy was taught by Christ and the apostles in the New Testament.  This should be our primary basis for believing it. B.B. Warfield said,

“We believe this doctrine of the plenary inspiration of the Scriptures primarily because it is the doctrine which Christ and his apostles believed, and which they have taught us.” (Limited Inspiration, 1962 cited by Mohler, 42)

To quote Jesus himself, “the Scripture cannot be broken” (John 10:35) and “until heaven and earth pass away not an iota, not a dot, will pass away from the Law until all is accomplished” (Matt 5:18).

3. It’s the Historic Position of the Church

Inerrancy is the historic position of the Christian Church. The International Council on Biblical Inerrancy (ICBI) produced a whole book demonstrating this point (see John Hannah, Inerrancy and the Church, Moody). As Al Mohler pointed out (Mohler, 48-49), that inerrancy has been the standard view of the Christian Church down through the centuries. He cites the Hanson brothers, Anthony and Richard, Anglican scholars, who said,

“The Christian Fathers and the medieval tradition continued this belief [in inerrancy], and the Reformation did nothing to weaken it. On the contrary, since for many reformed theologians the authority of the Bible took the place which the Pope had held in the medieval scheme of things, the inerrancy of the Bible became more firmly maintained and explicitly defined among some reformed theologians than it had even been before.”

They added, “The beliefs here denied [viz., inerrancy] have been held by all Christians from the very beginning until about a hundred and fifty years ago.” (cited by Mohler, 41)

4. It’s Fundamental to All Other Doctrines

Inerrancy deserves high regard among evangelicals and has rightly earned the status of being essential (in an epistemological sense) to the Christian Faith.  Thus, to reduce inerrancy to the level of non-essential or even “incidental’ to the Christian Faith, reveals ignorance of its theological and historical roots and is an offense to its “watershed” importance to a consistent and healthy Christianity. Inerrancy simply cannot be rejected without grave consequences, both to the individual and to the Church. 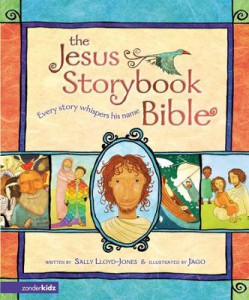 Every story whispers his name.

A Bible like no other, The Jesus Storybook Bible invites children to join in the greatest of all adventures, to discover for themselves that Jesus is at the center of God’s great story of salvation–and at the center of their own story too!

The Jesus Storybook Bible tells the story beneath all the stories in the Bible. At the center of all is a baby, the child upon whom everything will depend. From Noah, to Moses, to the great King David—every story points to him. He is the missing piece to the puzzle—the piece that makes all the other pieces fit together. From the Old Testament through the New Testament, as the story unfolds, children will pick up the clues and piece together the puzzle.

The Jesus Storybook Bible makes an excellent gift at Christmas, when we all remember that he is the puzzle piece that makes all the other pieces in our lives fit. 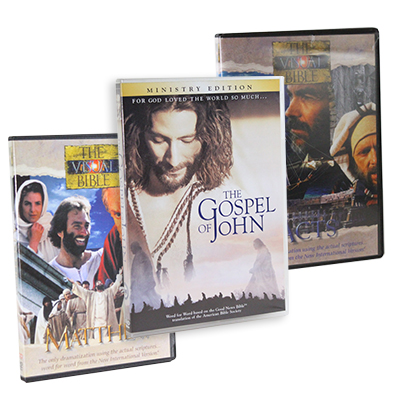 We usually post a recommend book but this month we are posting a recommend movie set. Journey back to first-century and witness the extraordinary events that changed the world! Meet Matthew and John as they reflect on the events they witnessed as Jesus’ disciples. Travel with Luke as he shares the struggles and triumphs of the early church. Shot on location, these vivid portrayals are adapted word-for-word from Scripture.

The Visual Bible: Matthew – This powerful and entertaining film is taken word-for-word from the text of the New International Version translation of the Bible. [Dove approved (12+). Approx. 265 minutes.]

The Visual Bible: The Gospel of John – Vividly comes to life in a faithful and powerful dramatization of the Biblical text, word for word, based on the American Bible Society’s Good News Bible. [Dove approved (12+). Rated PG-13. Approx. 180 minutes.]

The Visual Bible: Acts – Journey with the physician Luke as he tells the enthralling story of the danger, struggles, and triumph that marks the birth of the Christian church. Taken word for word from the text of the New International Version and Good News translations. [Dove approved (12+). Approx. 193 minutes.]